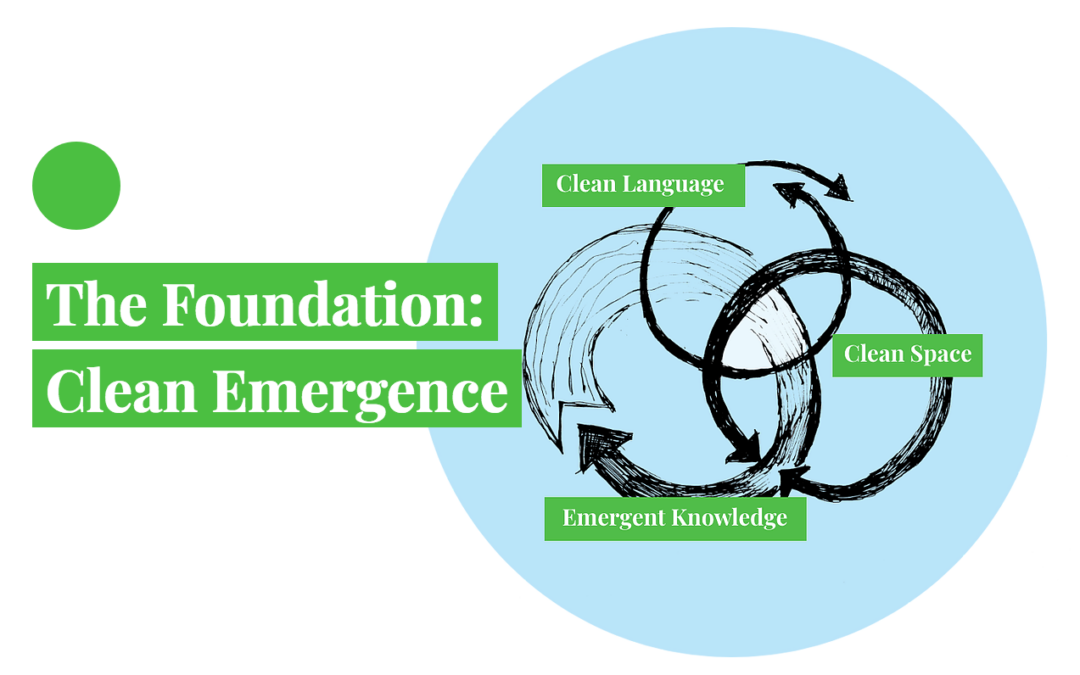 Clean Emergence is based on the work of David Grove, which I had the chance to study with David from 1997 to his early death in 2008. David, as Eric Rossi once said, was like a “gentle genie let out of the bottle”. He certainly went far from his roots geographically, working in the USA, UK, Europe, but always deeply influenced by his early life in New Zealand, where he was born to a Christian father and a Maori mother.

His first therapeutic work was in the late 70’s and 8O’s with the traumas of Vietnam veterans and of sexual abuse in families. Contrary to the therapeutic practices of re-enactment much used at the time, he explored the effects of staying close to his client’s words and so to their experience, restricting himself to very simple questions. He found that when he did this consistently, people fell into metaphorical language. Their experience when asked “And that was like what?” would produce a description like “ It is like pushing against a brick wall”, “It is like drowning”,  “It is like a volcano”. This entrance to the Right Brain’s creativity David took seriously, keeping his questions simple and clear like “And what kind of wall is that wall?”  or “Is there anything else about drowning?” “And where is that volcano?” thus developing an unknown landscape that gave form to the invisible sensations created by thinking about the event. He found that if he continued this development further finding a time sequence “And what happened just before volcano?” or accompanying his client in the story “And what happens next?” he allowed his client to relive the trauma not in direct but in a parallel description that existed in the present moment and thus could permit new unexpected resolutions to emerge. The good news was that the metaphorical description did not cause re-traumatisation.  The Right brain transferred the new information to the Left Brain, a process known as Isomorphism, thus allowing the metaphorical description and new solution to be registered and used for new action in the world.

Later his Clean Language, based on 9 basic questions, was seen to be equally useful in problem solving at other less traumatic levels. It has been developed extensively for Coaching and for Team work in Business, Education and general Life Skills. The principle remains the same:

The Questions are simple and direct and follow exactly the client’s words thus tracking the movements of their minds without imposing the models of the Facilitator. The Client’s inner space opens to a deeper Intelligence that can find resources and solutions not available in ordinary discourse.

This deeply client-centered approach moves to “a fourth kind of power relation – not sovereign, not disciplinary, not auto-repressive but shared, mutual and independently exercised”. This is a quote from Philip Harland in his book “Trust me I am the Patient” where he discusses the profound effects of using Clean Language so clients enter their own inner experience of outer events.

After his success with Metaphors and Clean Language and a well-established reputation in the Therapy world in both the USA and the UK, David suddenly announced that he was going into silence for a year while he studied Space! Consternation among his friends and colleagues: how could he leave something so successful for something so nebulous? But of course, that is what a gentle genie would do to escape from the bottle he had got enclosed in! Anyway there was no stopping him, he learned para-gliding and he responded to the new science of small worlds and complexity theory.

He was not alone in exploring space as a way of information processing. Arnie Mindell was aware of the movement needed for therapy and for his World Process. Bert Hellinger was exploring space in his Family Constellations and Rupert Sheldrake with his historical re-enactments. So what did David bring to this developing field?

Secondly, David saw this work as the creation of a network of information between a number of nodes found in Spaces the client moved to. And this in response to the Facilitator’s direction  “Find a Space that knows something about that?” “That” being any objective or issue or situation that the client wished to explore.  He left the vertical drop down into the mind’s choice of words used in Metaphor explorations, for a horizontal world of connections that were all equal. As the client moves to find at least 6 spaces that reveal different information, the language used is not developed, instead the person’s brain and nervous system are given the chance to see a wider space that holds these different types of information. When the spaces are found by moving, and then placed in relation to other spaces, the brain re-organises the information and again new unexpected connections can be made.

So where did our “chaser of ideas”, as David called himself, go after this? He explored the hypothesis that the Facilitator could step even further back from the field of the emerging information generated by his client’s own Intelligence. At the time the idea he chased was “Six degrees of Separation”, an experiment carried out in the USA to see how many people had to be contacted in order to reach someone far off, for example, the President of the USA or a famous actor. The answer was a much smaller number of moves than predicted, around 6.

David wanted to know if it was the same in the Mind: for example, when a client has a presenting problem, how far off is he from being able to envisage a solution? Could it be 6 thinking moves?

So the Download was born: a client presents his problem and David asks “What is the first thing you know about that?” They write it down “And what is the second?” “And the third” “And the fourth?” “And the fifth?” “And the sixth?”. The client will have developed their own thinking through this process and normally the point six is a much clearer starting point for a coaching or therapy session!

David then studied the pattern of those six moves and he suggested that a normal sequence is 1) Proclaim 2)Explain 3) Reinforce 4) Wobble 5) Crash and Burn 6) Phoenix. And all that without questioning any words or thoughts. The client faces the movements of his own thinking, he reveals to himself his own creative understanding, his own healing powers.

Books:   “The Power of Six” Philip Harland and the French translation by Maurice Brasher

You have Successfully Subscribed!